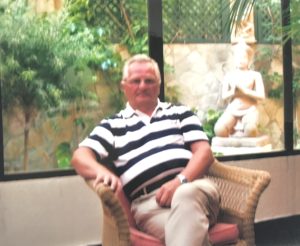 Waldemar Pieczko was born in 1939 into a mining family in the city of Hindenburg in Upper Silesia. At that time, the area was part of the German Empire. At the end of the Second World War, Upper Silesia was allocated to Poland as ‘change’ to compensate for the eastern Polish territories that the Soviet Union had annexed in 1941 under the Molotov-Ribbentrop pact. The name Hindenburg was replaced by ‘Zabrze’.

Waldemar’s formal schooling was very limited. Under the guidance of a skilled older colleague, however, he developed into a decorative painter in practice. In that profession he worked for various companies in the region. In addition to these activities, he took a course in fine arts (Ognisko Plastycznego) from 1957 to 1961 as a leisure activity with the painter Krystyna Jedrzejowdka and the graphic artist Kazimierz Kandefer. 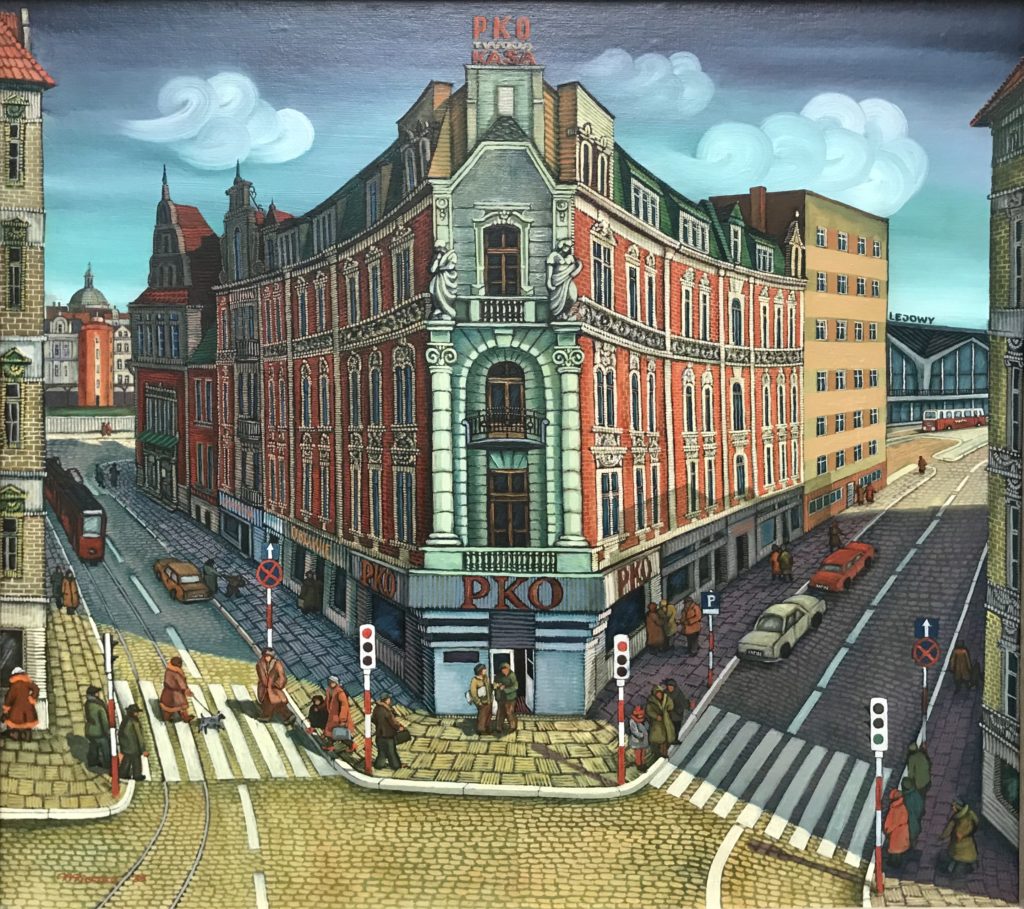 In 1958, to further develop his artistic skills, he took part in an open-air visual arts workshop organized by the union. There he was inspired by Teofiel Ociepka, a gifted naive artist, who painted Hieronymus Bosch-like visions of hideous monstrosities, ravaging monsters and dragons. The experience gained made Pieczko decide to join the art group of the KWK coal mine in Zabrze. There he met the well-known Silesian artists Bronislaw Krawczuk and Romuald Nowak and would remain a member of this inspiring artistic society for almost 20 years. 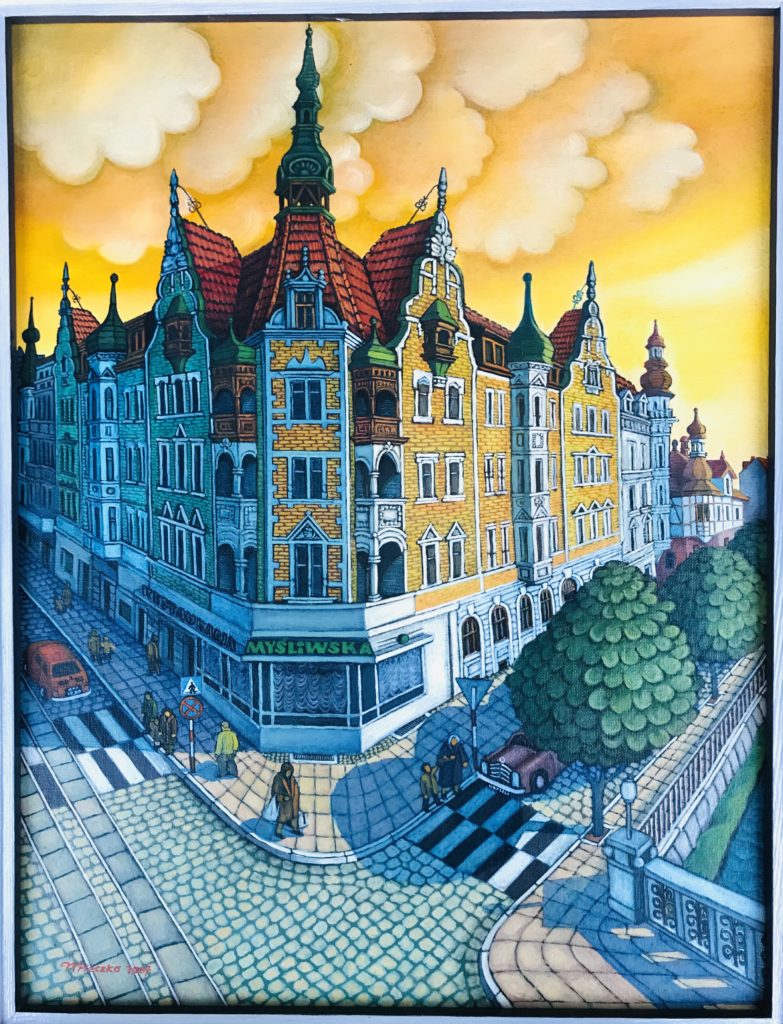 In the first years of his membership, he mainly focused on historic cityscapes, monumental 19th century buildings and working-class neighborhoods with the characteristic tenements in red brick. Partly due to his special compositions and the color palette used, he created a subtle magical-realistic atmosphere in these works. In later years he expanded his repertoire with scenes of Silesian mining and family life. He also produced paintings with representations based on mythology. These works also often radiate something magical. 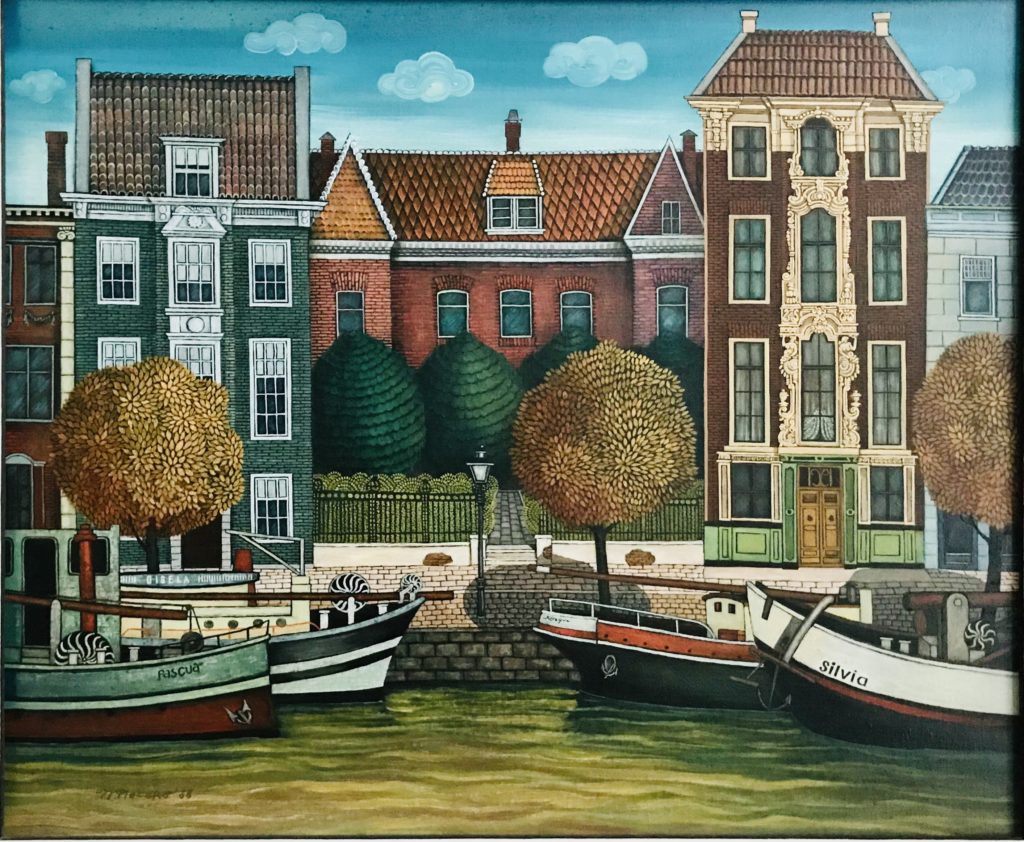 In 1961, at the age of 22, he married 17-year-old Gisela. The young couple moved in with her parents in Biskupice and later settled in nearby Zabrze, Waldemar’s birthplace. They stayed together all their lives and had a daughter.

In 1986 Pieczko received permission to settle in West Germany with his family. They went to live in the Lower Saxon community of Grosz Escherden and later in nearby Hildesheim where he found work at the industrial company Starter Motors Generators Robert Bosch.

The reorganization of his life and living situation took a lot of time and energy, while the three-shift work at his new employer made a structurally ordered existence as in Poland practically impossible. These circumstances forced him with a heavy heart to give painting a low priority. He continued to work as a highly valued colleague at the starter motor factory until his retirement in 2002, but unfortunately he was unable to develop further in his artistry.

His work is included in the permanent collections of museums in Zabze, Bytom and Katowice and in private collections in Poland, the Netherlands, Germany and Sweden. His work has been exhibited several times in Poland and the Netherlands (Museum het Hof in Dordrecht, Museum de Rietgors in Papendrecht and Museum de Stadshof in Zwolle). In September 2021 his work will be exhibited again in the beautifully restored Silesian Museum in Katowice (Poland).