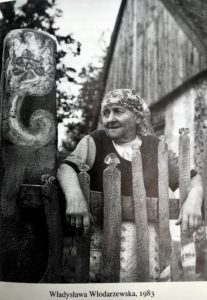 Wladyslawa Wlodarzewska was born in 1904 into a farming family in the hamlet of Baruchowo in central Poland. This area was part of the Russian Empire at that time. Wladyslawa was the eldest of 7 children. Her father worked on a nearby estate. At the outbreak of the 1st World War he was conscripted into the Tsarist army for the war against the Germans. After the armistice in 1918, he took part in the Polish-Soviet war in the army of Marshal Pilsudski. He probably participated in the Battle of Warsaw (August 1920). Then he returned home. 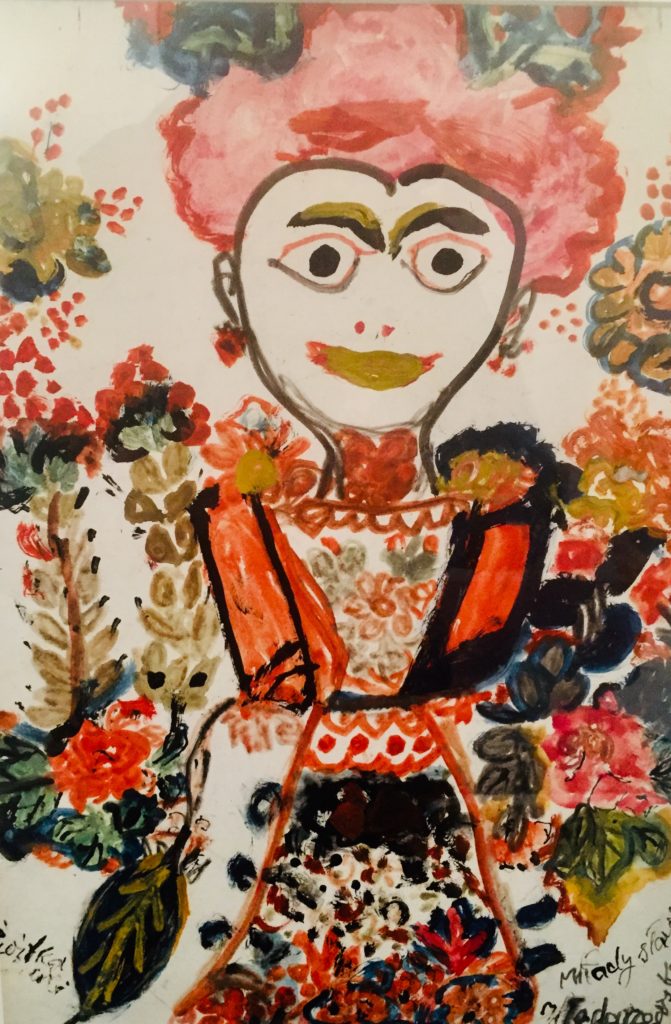 All those years the family took care of itself. Mother earned a meager income from her work on the estate and Wlodarzewska was in charge of taking care of the household and her six brothers and sisters. From her mother she learned the folk art techniques of casting patterns in white sand on the threshing floor and making artificial flowers and spinning from straw and reed paper. There was practically no formal school education. 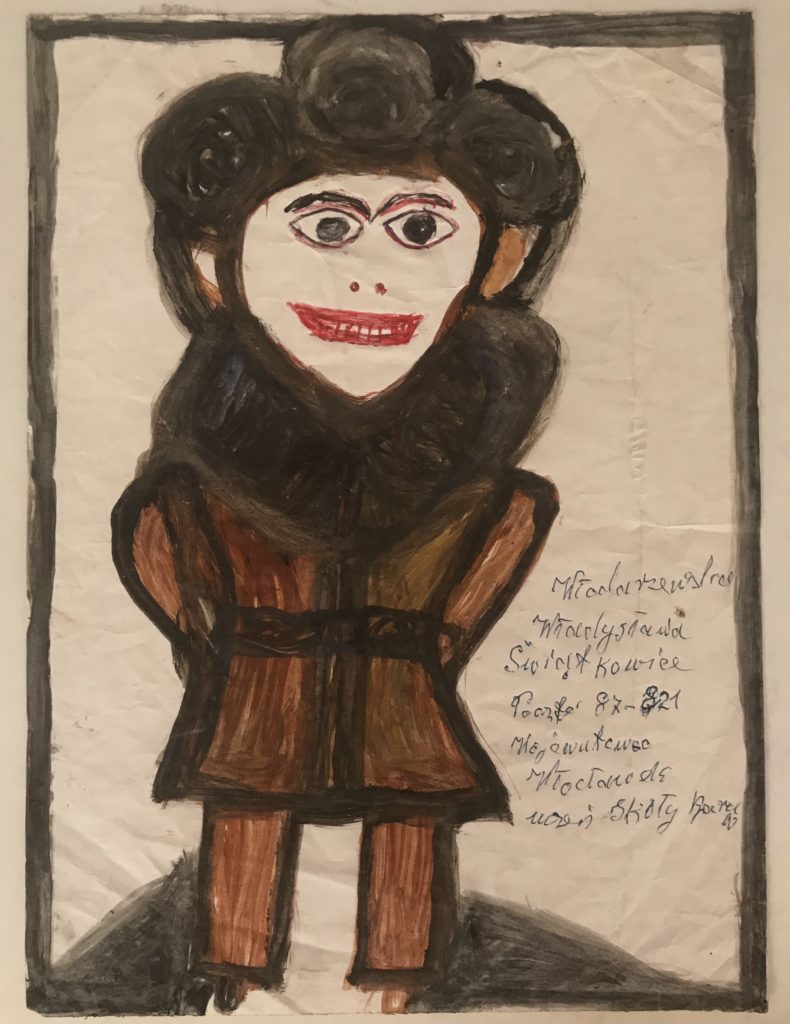 After her marriage, the couple moved to a small farm in the nearby village of Swiatkowice in 1929. Stimulated by her sister-in-law Eleonora Adamska, a regional celebrity in the tradition of Kujawian folk art, she continued her artistic activities. When she did not have access to (packing)paper or pieces of cardboard, she painted the walls, door and window frames, ceiling lamps of her house, the fence of the yard, or the well.

With her images of beautiful women surrounded by floral patterns and leaves, she grew further and further away from the folk art tradition, developing her own style and creating a unique image of female beauty. She began to paint more and more daringly with a broad brush in a wide palette from bright reds and yellows to mixed, often hard-to-define colors. Gradually, male figures, animals and birds also appeared in her works.

The responsibilities weighed heavily on the young girl and caused a lot of stress and frequent headaches. When the siblings were in bed, she painted primitive patterns in blue paint on the whitewashed walls with her fingers. She found that her headache subsided as soon as she started painting. This activity became an obsession and an effective remedy for the headaches. She made brushes from sticks and bits of textile and also began to depict flowers and beautiful women on the walls of the family home. 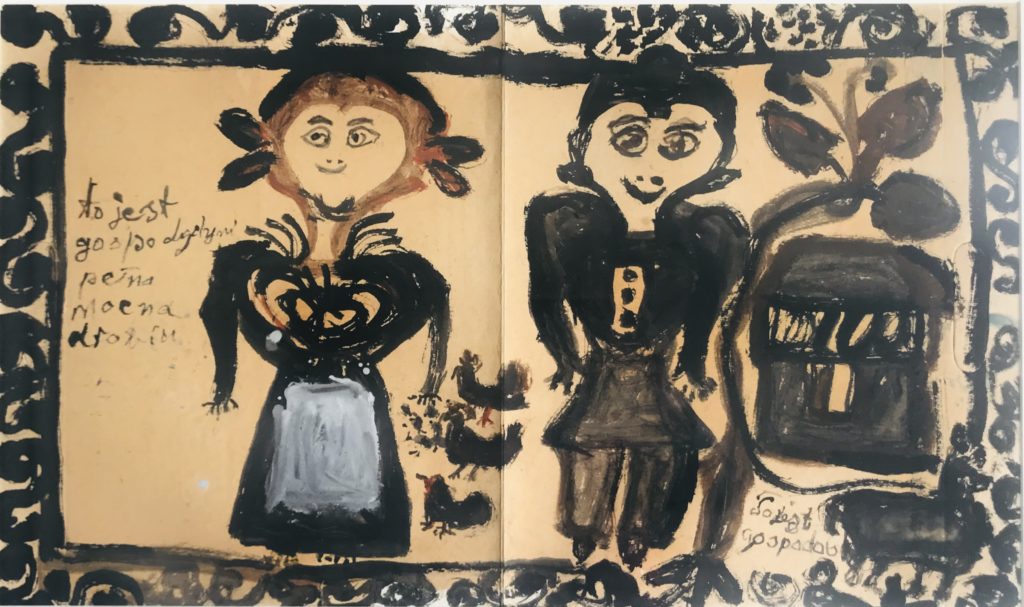 “This is a farmer’s wife with many chickens”. Watercolor on paper 43 x 72 cm

In 1982, in her 79th year of life, she was more or less accidentally ‘discovered’ by the German art lover Hans-Joachim Schausz. He gave her a good supply of drawing paper and paints. This action triggered an enormous productivity in her and contributed to the full development of her talents in the last decade of her life. The richest and most attractive paintings date from this period. In addition to elegant ladies with chic hairstyles, hats, handbags and umbrellas, she also portrayed important people such as President Jaruzelski, officials of the Polish National Bank, the director of the regional museum, professors, priests and writers. Some of these works feature ironic remarks. Some years before her death in 1992 she had to stop painting due to gradually deteriorating eyesight. 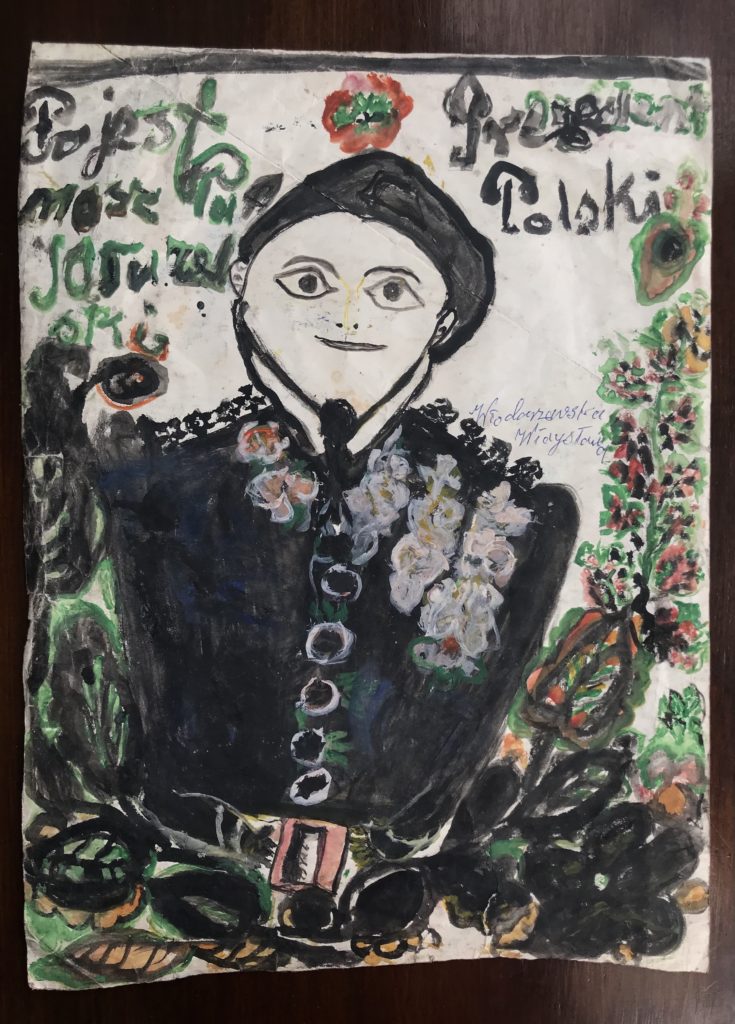 “This is our mister Jaruzelski Polish President”. Watercolor on paper 48 x 35 cm

Her works are in the collections of the museum Ziemi Kujawskiej i Dobrzynskiej in Wloclawek, the ethnographic museum in Toruń, the museum im. J. Kasprowicza in Inowroclawiu, the Verbeke Foundation in Belgium, the Stichting Beeldende Kunst Amsterdam and private collectors at home and abroad. She has been awarded several times at Polish art events. In the Netherlands, her work has been exhibited in Dordrecht (Museum het Hof and Galerie de Meerminnen), Papendrecht (Museum de Rietgors), Zwolle (Museum de Stadshof), Breda (Galerie 48) and the Kunsthal in Grave.