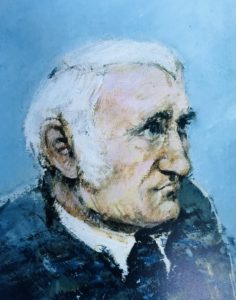 Zygmunt Warczyglowa was born on December 19, 1922 in Poznan. His father worked on the railways. He had five brothers who all died during or shortly after the war. After primary school he worked part-time at a printing company in the Wybicki Street.

In 1939, at the age of 17, he left for the sub-Carpathian region in the extreme south-east of present-day Poland. The Lemken, an ethnic group of mountain people with their own culture related to Ukraine, lived in this region. In the village of Tyrawa Solna he met Maria, the love of his life. On the day after their wedding in 1942, he was taken by the Germans to the Silesian town of Waldenburg (now: Walbrzych) for forced labor in the coal mines. He managed to escape and after wandering he ended up in the village of Kossebau in the German state of Sachsen-Anhalt, where he worked as a forced laborer on a farm for the rest of the war. After curfew he drew and painted. A (German) teacher also working there advised him on how to further develop his skills while maintaining his own style. 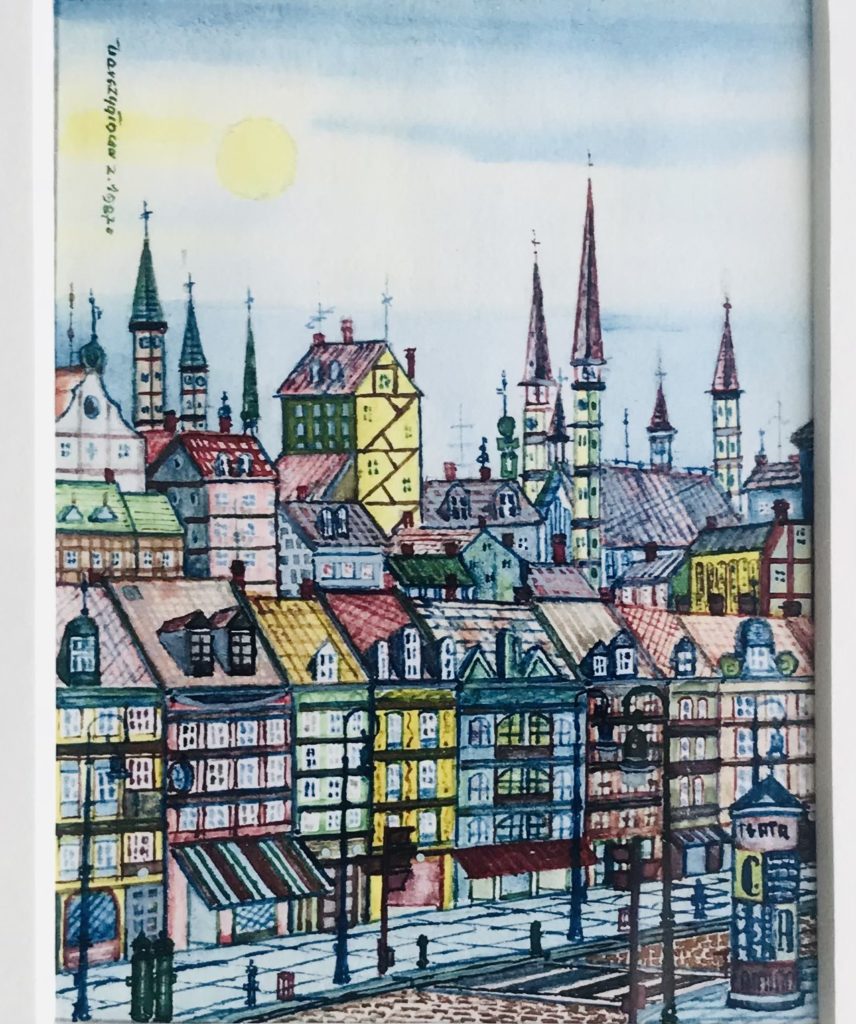 After the liberation and a short stay in Szczecin, he returned to Poznan where he became a fisherman and later a worker in the Cegielski Train Factory. He was reunited with his wife in 1947 when the population of the Sub-Carpathian region was relocated to the west by the Polish government in order to crush the persistent partisan uprisings in the Lemken region. In 1952 their daughter Julia was born.

In 1954 he started working for the Municipal Transport Company of Poznan. For nine years he crossed his beloved hometown as a tram driver. As a leisure activity, he produced small watercolor paintings, greeting and congratulation cards depicting flowers, fruits, horses, landscapes and paradise scenes with Adam and Eve. In 1963 he was sent on invalidity pension due to a serious illness.

To fill the free time, he became a member of an association of sport fishermen and started as a kind of nostalgic self-therapy with ink, chalk and gouache to create minute images of an imaginary Poznan. Cityscapes without people, with monumental buildings, skyscrapers and a large number of churches with the dials of the clocks invariably at 3 o’clock. Painting developed into a true obsession and his products soon showed such quality that in 1966 he was invited to participate in an exhibition of Poznan sport fishermen in the municipal culture palace. Warczyglowa participated in 40 works. The evaluation committee consisting of the graphic designer Zbygniew Kaja (a brilliant representative of Polish poster art) and the distinguished painter Professor Eustachy Wasilowski awarded Warczyglowa the first prize. After this an intense friendship developed with Kaja, who advised him on the visual arts. 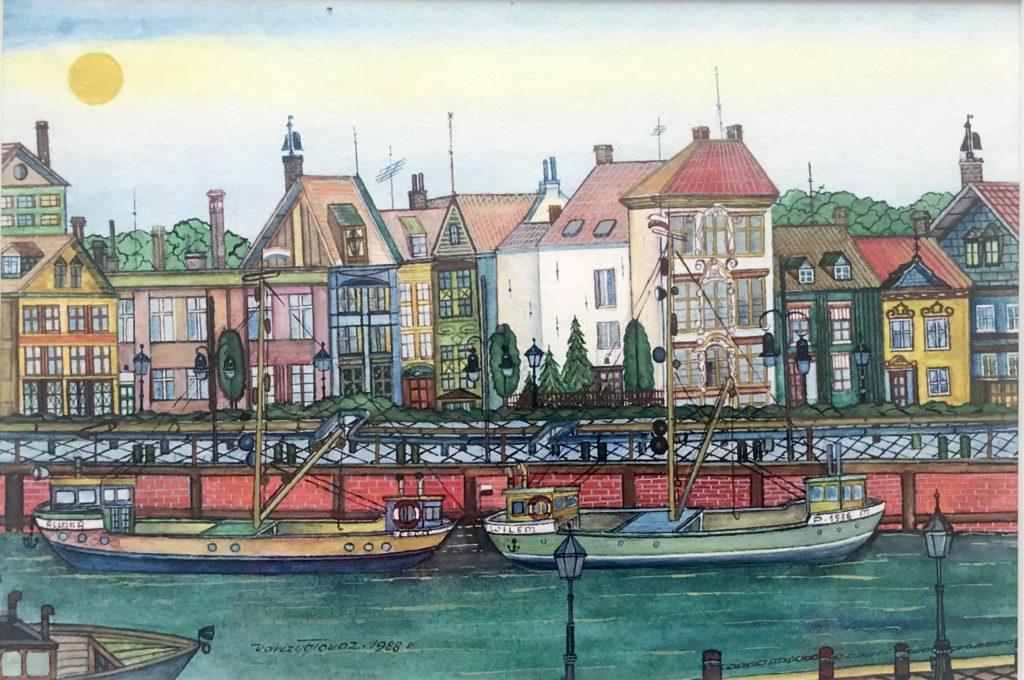 His first one-man exhibition followed in 1968 in a location of the Friends of Poznan Association. The exhibition was opened by the art critic Adam Kochanowski who would become a major promoter of his work. Television, radio and press showed interest, his paintings were bought by the National Museum in Poznan and a newsreel was devoted to him. This established Warczyglowa’s position in the art world and exhibitions followed in Poland (Poznan, Warszawa, Krakow, Wroczlaw and Szczecin), Germany (Hamburg and Berlin), Italy, Norway, France and the Netherlands (Dordrecht, Papendrecht and Zwolle). However, all these successes have not led to a change in his personal attitude and attitude to work. He continued to work passionately and in all modesty until his death in 1988. 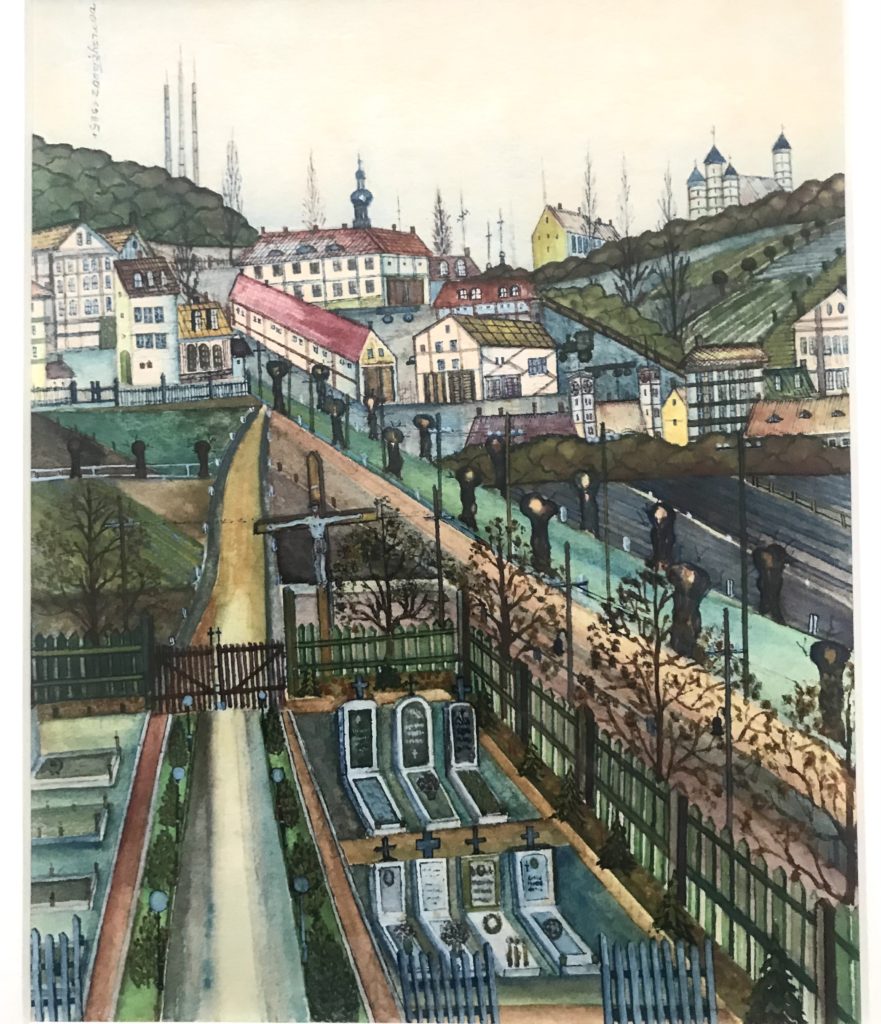 In 2012, the Galeria Miejska Arsenal in the historic center of Poznan organized a retrospective exhibition on the initiative of the collector Zbyszek Wybicki. The exhibited works were made available in equal parts by Wybicki himself (Poznan) and the collectors Dieter Hilpert (Germany) and Alina and Willem Otten (Netherlands). The art historian Ewa Obrebowska-Piasecka published the monograph „Rozmowy Wokol Zygmunta Warczlyglowy“ (Conversations on Warczyglowa) on the occasion of this event.Works by Warczyglowa are included in the permanent collections of museums in Poznan, Krakow, Warszawa, Zabrze and Hamburg.In 2016 the city council of Poznan named a street after him.